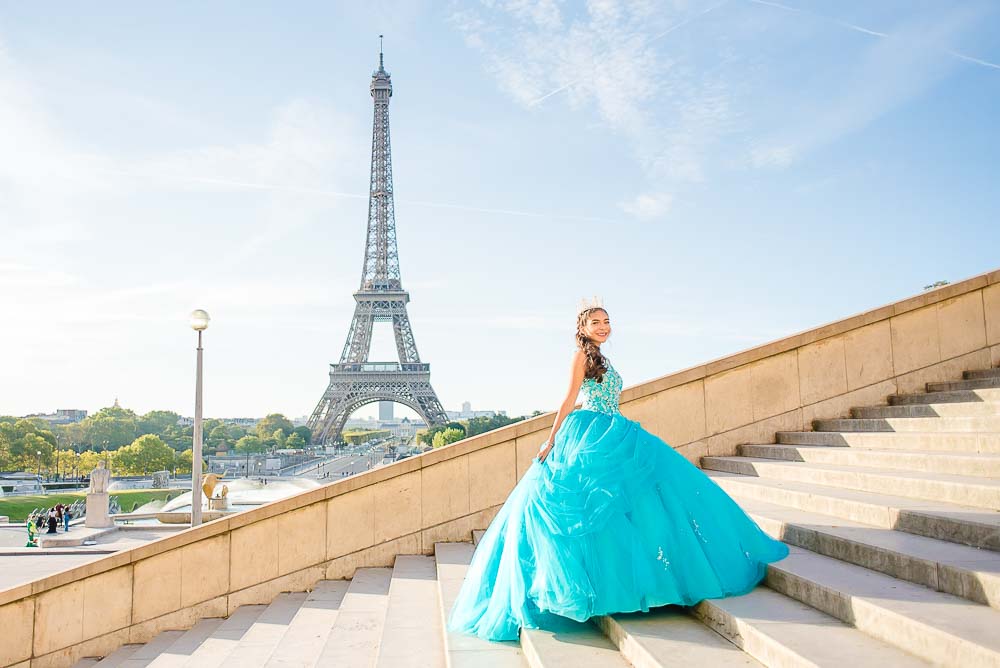 Thank you Jo Anna & Richard for this nice feedback about Deandra Quinceañera photo session in Paris :

“My daughter Deandra has always dreamed about being Cinderella and having a Paris theme like Quinceañera, however, she never imagined that it would be like this. Celebrating a young girls life at her 15th birthday is a beautiful Latin tradition by giving her a big fiesta and celebrating her becoming a young Latin women with her family and friends.

But like the fairytale of Cinderella, this fiesta ends at Midnight. So her father and I took it a step further. Instead of giving her a Paris theme Quinceañera, we went ahead and brought her to Paris and actually had a true Paris Quinceañera. To see her in her beautiful Cinderella like Quinceañera dress, I wanted a good photographer to catch this moment.

Never been to Paris, I did not know who to contact. A very good friend told me about one photographer that a friend used but when I contacted him, he was unavailable on the dates we were going to be there but this photographer didn’t stop there. He was nice enough to get me in contact with Alex from The Parisian Photographers and I was so thankful that he did. Booking him months in advance, Alex was able to help me with any questions I had. He also was there to guide me in what I needed to do before the big day.

When we got to our first location, Place du Trocadero, the view was just breathe taking. The city, the Eiffel Tower look even more beautiful from where we were. When it was time for pictures, my daughter was ready. She listened to what Alex wanted her to do and made it fun for her. It was more fun when he included her friend in the photos as well.

Alex also got her father and I in the photos, which I loved. He took us to two other locations that also were just beautiful!!!.

After the photo session, he said that he would contact me in a couple of days when the photos were ready to view. The turnaround was quick…only two days later after our session he forward me the link to the view the pictures and we were just taken away by the beauty he captured. My daughter and I just cried. We could not believe how beautiful the pictures came out. My daughter is beautiful young lady already and he just made her glow! The “City of Love” is Paris and Alex made us fall more in love with it by what he captured for us to see forever.

If you are planning a trip to Paris and want a professional photographer, Alex is amazing in capturing those beautiful moments. We plan to come back to Paris again and when we do, Alex will be the one we request to take our photos.

Alex, I know we’ve thank you so many times already but we are truly blessed to have met you as well. This was a Parisian Quinceañera like no other and Deandra will always remember the time spent with you for a life time! Thank you sooo much for making our little girls dream be better than a Cinderella fairytale. You will forever be her Prince Charming that made her dreams come true.