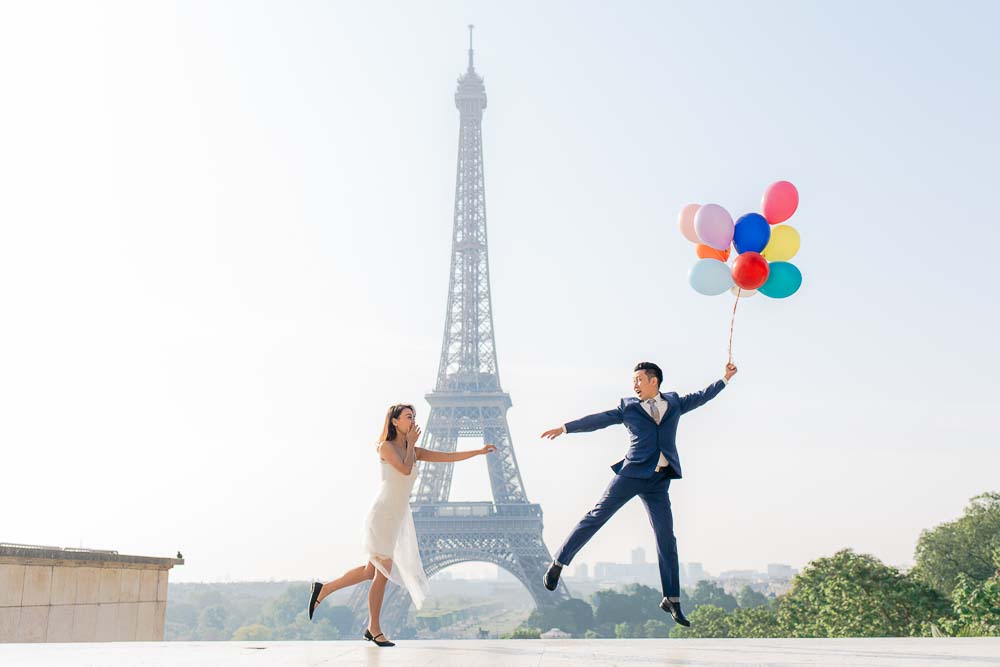 Surprise Proposal at Eiffel Tower with balloons and champagne

Hopefully, at The Parisian Photographers, we do like challenges, but it had to be well organized in advance !

Andy also wanted some balloons as a prop. I suggested him something: he would pretend to Mi that he wants to wake up early to see the beautiful sunrise by the Eiffel Tower. When they reached the spot, the sun was slowly rising up in a clear blue sky.

As planned, I was already waiting there with my assistant and the balloons (easy then for Andy to locate us), pretending to wait for my clients to come for a photo session. Then Andy came to me (pretending to not knowing each other) to ask if he could borrow the balloons for one picture he would take of Mi with his smartphone.

Here is the key moment: I told them that my clients were running late and that it would not be a problem for me to take a picture with my camera and send it to them. Mi was very surprised and happy about this, still having no idea of what was going on!

Andy and Mi were facing me and Andy knew it was the big moment: they were perfectly positioned so he could just take all his time telling her how much he loved her and finally proposed her!

“Jordan at The Parisian Photographers was a life saver for me. It was a last minute surprise proposal in a city I don’t live in but Jordan came through for me to help have the champagne and balloons ready at the site. He even played along to pretend to be a stranger when in reality we had been e-mailing back and forth to make sure the surprise would go off without a hitch. To top it all off he also helped make sure I not only had the best pictures that day but also a video of the proposal that will forever mean the world to us.